My wife has a friend that is a world-class gift giver. She always seems to pick out the perfect thing for each person. For my wife's birthday in 2020, her friend got her something called a brewery passport. 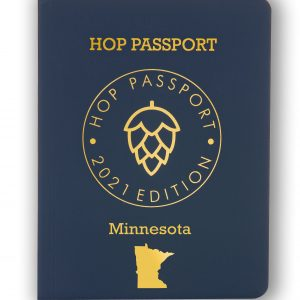 My wife and I love to go to breweries, so that was a perfect gift!

A brewery passport is a book of breweries that are each located in a particular area. The Hop Passport is organized by state. We got the Minnesota version, but they have one for lots of states.

In the front of the passport is a map of Minnesota with a number on the map wherever there is a participating brewery. Those numbers match up to brewery names in a list that shows all of the breweries in the passport. There are around 100 breweries listed in the Hop Passport.

After that passport front matter, the rest of the book dedicates a whole page to each brewery, and the breweries are organized by alphabetical order.

Each brewery page has the name of the brewery, a picture of their logo, a short description of the brewery and its history, and a few quick facts, such as whether they have food, TV, or are dog-friendly.

When you travel to one of the breweries listed in the passport, you show the passport to the beertender, they stamp it to show that you have been there and that the coupon has been redeemed, and then you get two beers for the price of one.

Two for one beer for your first round is a great deal. Beers at most breweries are somewhere between $5 and $7, so not only is that a decent savings at one brewery, but if you multiply that against how many breweries you visit, you could save a significant amount of money. And it is just the right amount to be useful. If you tend to use your passport with another person (like my wife does with me), then one of you gets a free beer. If you use your passport alone, then a free second beer is also useful. Two beers is not too many, and so you could reasonably take advantage of the deal. I could easily see a different passport requiring 2 or 3 purchased beers before getting a free one, at which point you would probably be unable to use it by yourself if you plan on driving.

Each brewery can only be stamped once, but there are plenty of other breweries in the book to pick from. So, if you are willing to drive a little ways to a brewery, there is always a place to use your passport.

The passport only costs $25, which probably doesn't earn enough to pay for all the free beer the passport holder receives. So it might make you wonder why these breweries would be willing to participate in the program. Breweries are willing to be in the passport because it brings them customers who might never have otherwise heard of them and who might not have been willing to travel to their location. The passport encourages people to go out of their way and try new places.

My wife and I have definitely been to breweries we would not have been to if it were not for the Hop Passport.

And trying to make it to all of the listed breweries and collect a stamp at each is a fun game. Its a way to keep you motivated to get out of the house and try something new. And there is even an official game. The first person to collect a stamp from all of the breweries wins a T-shirt and a prize of money. Each state awards a different amount of money to the winner, but in Minnesota the prize is $1500.

It is a lot of breweries to get to. 100 breweries. 52 weeks in a year. That's around 2 breweries a week. Every week. It is an ambitious goal to try to make it to all of them.

My wife and I started out the year strong. We were doing 3 or 4 breweries per week. It really felt like we could have the passport completed by the end of summer. But then COVID-19 caused everything to shut down and we were unable to visit breweries for months. And even after the restrictions lightened and we could have visited breweries, we didn't for a long time. And when we did we weren't getting to nearly as many as before. We had lost momentum. And then the year came to an end and the Hop Passport expired.

We ended up making it to just over 50 breweries. A little more than half way. Which is pretty good, especially for a worldwide pandemic year. We are still taking our passport with us to new breweries to collect stamps even though we don't get the beer special, because we still hope to have a completed passport at some point.

We really enjoyed the Hop Passport. If you make it to just a few of the breweries to collect on the 2 for 1 deal, the passport pays for itself. It is a lot of fun and encourages you to try new things. I could not recommend the Hop Passport more highly. I loved it and I really hope you give it a try.

Have you ever had a Hop Passport? Have you ever heard of a similar product but with a different brand name? Do you think you could make it to 100 different breweries in a year? If you could design a brewery passport but for something besides breweries, what would you make it for? Parks, art galleries, restaurants, water-front park benches? Let me know in the comments!

November 12, 2020
I am a blogger. I want to write articles about things I care about, have them crawled, indexed, and ranked by search engines, and have people organically find and read my content. I am not writing only for me (although I do enjoy the process of blogging and writing my ideas out), I am writing to attract and inform/entertain an audience. If my content does not rank in the search engines, then nobody will find my content, and there is much less of an incentive for me to be blogging. From Google's perspective (and the other search engines), it seems that they want to show users the best possible content which will satisfy their queries. They should not have any biases for or against any sort of content. So long as a piece of content is valuable to readers, it should show up in the results. That is just good business for them. With the millions of blog posts being published every day , it is very difficult for a company like Google to determine which articles are the best quality and
Read more